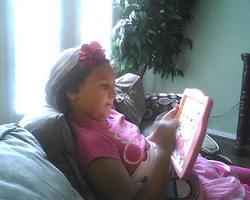 Maggie’s story began just like any other little girl’s. She was born in the arms of devoted parents who always held a great level of faith in the well-being of their daughter’s future. The hopes and dreams of her parents were suddenly eclipsed when doctors arrived with news that would forever alter their family’s life. Maggie was diagnosed with leukemia and barely over three years of age. What should have been a week-long stay in the hospital, for her induction to chemotherapy, turned into a 2 month stay. After many complications Maggie suffered kidney failure, cardiac arrest then lapsed into a coma. While in the coma doctors advised that Maggie’s brain had suffered catastrophic damage due to high blood pressure, chemotherapy, and multiple drug interactions. The family was urged to sign a DNR (do not resuscitate) order in case she went into cardiac arrest again. At that time Maggie was labeled as being in a “vegetative state”. During the next few years Maggie would have more than a few more brushes with death. Maggie was sight and hearing impaired but after six weeks her vision returned and she was walking again with help. But the mystery of her hearing had just started.The doctor’s diagnosis- Cortically Deaf , which means her ears work but the part of the brain that interprets sound is dead – it also means that legally she does not qualify for any services for the hearing impaired.

Her parents would experience dark days and difficult times. In spite of all that had happened, Maggie’s parents continued to have faith. Maggie managed to beat the odds, but at a great cost. The therapy and medical treatments that provided the only escape from her leukemia diagnosis also caused a dramatic amount of damage to her brain. The damage was so great that most doctors thought she would not be able to perform the slightest of tasks without constant assistance. In spite of everything the doctors told them, Maggie’s parents would adamantly continue wielding faith. For faith was the only weapon they could use against this intrusion that had so altered their once peaceful life. Maggie herself wielded unfading hope as well as most of her family and the doctors that saved her believe that she had and has a will and a fight like no other.

Maggie eventually recovered, but she would never regain the abilities that she once had, or the future of a young girl without severe disabilities. However, Maggie remained happy as she always had. Years passed, and the parents of a young girl who had battled leukemia and won, were beginning to feel that in spite of everything she went through, she might not reach the potential that they knew she had. But the faith that they held onto for so long seemed to repay them, because something great was about happen.

The two parents were always determined to connect the gap that isolated them from their daughter. Maggie’s brain damage and the linguistic struggles it brought along with it, made it all but impossible to connect with her in the same way people without a disability connect with one another and take for granted. Her parents began the search for a bridge that would connect their world to their daughter’s and to everyone she would meet. While many options existed within new and specialized technologies, the solution would present itself in an unlikely source.

Both the iPod Touch and iPad provided a wide array of assets that were never present before. More than ever before, Maggie was able to seamlessly communicate with others about what she wanted and what she thought. Now Maggie speaks sentences through her iPad using the Proloquo2Go app. She is also learning how to read and write through different apps. She now can speak up to forty-five words on her own. Before anyone knew it, Maggie’s success spread to others who held similar diagnoses and who found the same level of empowerment in the solution Maggie used. To the amazement of everyone, children with disabilities especially those that are non-verbal could finally have a voice. In this, everyone realized that Maggie would become part of a future greater than any of us could ever imagine. 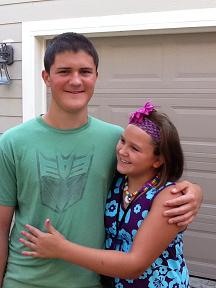 Recently Maggie has become the face of a new movement and of a new age for children with disabilities across the world – an age where children with disabilities will never have to live in silence. It is now a time where the prayers of thousands of parents across the planet can finally be answered. I just sit here in awe, as I continue to try and grasp the realization of my place in this historic chapter of time. My name is William Merrill, and Maggie is my sister. I believe that everyone who reads this has the opportunity to become a part of something much greater than them-selves. I hope that my sister’s story continues to inspire and that one day, every child around the world will have a voice to be heard and the ability to make a difference in the world we all live in. As our Mother says, “Because everyone deserves to be heard.”
By William Merrill, 17, Maggie’s brother