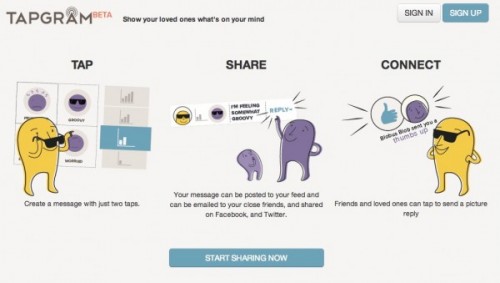 With over a billion people using Facebook globally, it is easy to forget that there are still groups of people who are not able to get the most out of the world’s largest social network. When people refer to the “digital divide,” they are usually talking about the division between the haves and the have nots. There’s another important divide that separates the cans from the cannots. Facebook can be out of reach for people who have difficulty with keyboards, language-skills, or traditional user interfaces.

One of those for who social messaging was out of reach was Chad Ruble’s mom, Lindy. She is one of those people for whom doing more than “liking and lurking” wasn’t possible. Thirteen years ago, Lindy suffered a severe stroke that left her paralyzed on her right side and with aphasia, a significant limitation in her ability to express herself with written and spoken language.

Lindy uses a lot of assistive communication programs to help her with therapy and during the course of her day, but some of these are costly and only work when you are in the room with the person. While Chad and his mother talk daily, he wanted an easy way to check in with each other. He didn’t just want assistive communication. He wanted assistive messaging. Email and texting were impossible for her, so Chad decided to do something about it. With family members and friends spread around the world, getting Lindy wired became the side project that took over Chad’s life.

Chad explored a variety of interfaces and systems for generating simple messages including his Knecticate project, as well as Iconicate, an Arduino-powered device he showed at the 2013 New York Maker Faire. This web application is the result of a lot of tinkering, exploring, and having fun. As Lindy played around with these prototypes, it was great to feel more in touch about the basics of each other’s day. Chad’s kids – just getting comfortable with keyboards themselves – enjoyed exchanging Tapgrams with Grandma and with each other. Relatives living in the UK could send and receive messages with Lindy. Then Lindy’s friends wanted in on the fun. 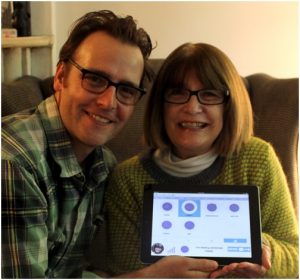 A few months ago, Chad launched Tapgram with the aim of making it easier for his family to share what was going on with each other. Tapgram is a free tablet-friendly web application that can function independently or sync with an existing Facebook profile to provide an accessibility bridge to social media. It is a kind of stripped down, visual social network, optimized for a tablet–a sort of “Facebook Light”, easy enough for a four-year-old to use. Facebook was too noisy for Lindy and hard to navigate. Tapgram was the missing link, an accessibility bridge to the world of social media allowing her, for the first time, to post updates, track replies, and keep tabs on her friends. Because it acts like bridge to Facebook for people who were previously shut out of the social media party, Chad hopes that many will feel a lot less isolated and a lot more connected with far flung friends and family. 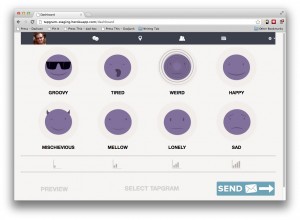 Hundreds of sign-ups later, a huge range of people have found Tapgram essential to staying in touch with the people they love including children with autism, people with traumatic brain injury, people with aphasia, the elderly, and, of course, the friends and family who care about them. The site has several standard choices for feelings, activities, and places, but there is also the option to upload pictures and create personal content with a few clicks. Everything on this site is simplified and extremely user-friendly!

Using three “tapboards” – feelings, places, and people, it is easy to send a message with just two taps. The boards are totally customizable so that users can add their own pictures and words associated with them. On the backend, it is easy for a caregiver or communication partner to create an account for someone else (selecting an admin), they can then manage friends and customize tapboards for someone they care about. It was important to make it easy for caregivers and communication partners to be able to access some of the more complex settings so that the primary user experience can be as simple as two taps for a message.

Here is what one mother of a child with Autism wrote to Chad: “My son was able to tell the world for the first time how much he hates getting his haircut! I love it and he loves Tapgram. I can tell he does as he gets more talkative too after using it.”

Chad is very interested in feedback from users- especially if they would like additional features for future versions. Visit Tapgram.com to sign up and for more information. It is free!

Here is a short video that explains TapGram.